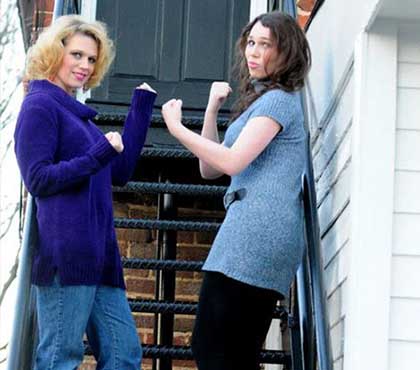 My daughter Hailey and I were recently diagnosed with Hodgkin Lymphoma Nodular Sclerosing Type – Stage 2A in the Fall of 2012. I am 42, and Hailey is my first born child, age 16. I am the mother of 6 children, all from the same father (Darell Johnston) – to whom I’ve been married since 1995. Our dual diagnosis is considered a medical phenomenon. We will be entered in a blood cancer study in Washington DC, but there are no current government studies on Hodgkin’s disease and genetics at this time. Last summer, I was sick with a respiratory illness that led me to seek medical help. I was sent home with antibiotics, but I did not get better. In October, I developed other symptoms (lumps on my neck and coughing attacks) that suggested I was very ill and needed testing. After scans and biopsies, I was officially diagnosed by a team of pathology specialists. Just a few weeks later, Hailey went through an almost identical process, to our horror. Our primary physician called me to read her chest x-ray results and told me there was a mass that required a closer look… she needed a CT-Scan. I felt as if I had been clubbed in the stomach as he said these words. Hailey was seen by the Levine Children’s Pediatric Hematology and Oncology office in Charlotte. Our nurse angel, Kathryn, gave us play-by-play information on what to expect and informed us on how she would guide us through every step of the treatment and survival (“survivorship”) process. I had begun my treatments close to home, but transferred my care to Levine Cancer Institute in Charlotte so that Hailey and I would be getting treatments at the same hospital campus. Hailey completed chemotherapy at the end of February, 2013; her radiation treatments ended in March. My chem ended 3/13 and my radiation ended 5/2. My PET scan is 6/12/13.