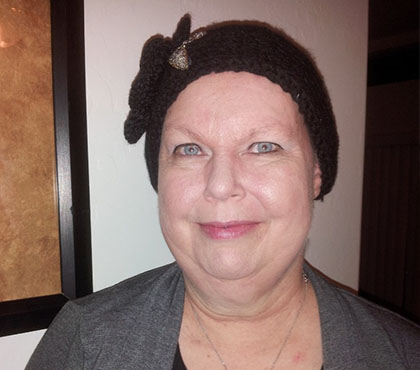 My name is Tammy Metzger, and I was diagnosed in February 2011 with Stage II Invasive Ductal Carcinoma. I was scheduled for a lumpectomy in approx. 6 weeks. About a week and a half before surgery I had a meltdown because I did not have a PET scan. My oncologist said it was against protocol for a woman of my age and symptoms did not need one. The doctor finally agreed and ordered it. It was then that I learned that I also had cancer in my chest, neck and bone. So now my diagnosis is Stage IV and when my surgery date came along I had a biopsy in my neck and my Power Port put in. Approximately a week after surgery I began my chemotherapy and went every three weeks until July 2011. The next set of infusions were to help the cancer stay at bay and also to help protect my bones. In May of 2011 my husband, Dean and I went to Chicago, IL to Cancer Treatment Centers of America for a second opinion. They told us that my treatment was going well and suggested that my doctor here in Arizona alter the dosage of my chemotherapy. They also offered to co-manage my treatments. My oncologist made the dosage change and I did not go back to CTCA. In May 2011 my port flipped and I had to go back to the surgeon and have it placed again. After this healed I continued to sustaining infusions every three weeks. In February 2012 I received radiation therapy to the left hip for pain control. Now I have been working fulltime since the start of my diagnosis. Just taking one extra day off for treatment every three weeks and also ½ day to 1 full day for different testing I had done. In the beginning of July 2012 I was let go of my job of ten years +. I applied for Social Security Disability for Stage IV Breast Cancer with Bone Mets. I was approved within a month but had to endure the six month waiting period. Thankfully my family and I then qualified for state aid insurance, AHHCS and food assistance. However there was a glitch in the new year of 2013 when my SSD started. Our state aid insurance and food assistance was canceled. It turns out that I was overqualified by a mere $8.18. We applied several times and my husband even contacted the governor’s office to see if she could help. They looked up our information, and a few days later we were notified that and they could not approve us either. The loss of insurance coverage meant that current doctor would not treat me. They offered a discounted rate to be cash pay only. This was the Medicare rate and still too expensive for just one treatment, let alone a treatment every three weeks and blood draws and scans that are needed. Thankfully in April of 2012 I was referred to Arizona Oncology to see Dr. Khattab by Paulla Miller that is with John C. Lincoln Hospital. Upon my first visit with Dr. Khattab he thought it best to have a new P.E.T. scan as he thought my cancer had returned. So he ordered the P.E.T. Scan and I was able to have it done that week. Dr. Khattab received the results right away and called back to his office. He examined me again and he decided that he needed a Brain MRI before he started my new chemotherapy. My results came back that my cancer had spread to my brain. I was diagnosed with 5 lesions in my brain and as the Radiation Doctor put it, many little spots just smoking and waiting to turn into more cancer lesions. In May 2012 I underwent 10 cycles of Whole Brain Radiation. At the end of May 2012 I started my new chemotherapy drug. Now I will be receiving this chemotherapy every three weeks until the Lord takes me home. The reason I am so excited to hear about your program is that I want every opportunity to make happy memories with my husband and daughter. We financially cannot afford any trips or extras. We are living on just my Social Security Disability and our regular bills are higher than our income. Also these last years since the beginning of my diagnosis have been very stressful emotionally and physically. Cancer affects not only the patient, but the whole family. I would love my family to have some time to just enjoy each other and not worry about anything for a week.